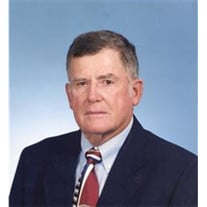 Billy Morgan, as he was known by family and friends was born October 25, 1928 and passed away October 9, 2014 at the age of 85. He was preceded in death by his parents, William Wallace Morgan, Sr. and Bernice Clements Morgan; infant sister, Ethel Clements Morgan and first cousins, Nancy Shanahan Mason and Jimmy Shanahan. He is survived by his adoptive family, Walter and Linda Pierce of Tyler, AL; Brian Holly, Joshua and Laura Strickland of Auburn, AL; Paul, Holley, Leah and Ellie Kate Pierce of Elmore, AL; first cousins, John Shanahan of Montgomery, AL, Clay Shanks Rowell of Robertsdale, AL, John Cornett of Birmingham, AL, Evelyn (Sissy) Cornett of Madison, MS, George (Coosa) Jones of Selma and many other cousins and friends. Billy's father died when he was five years old, leaving his mother to take care of their young son. He accepted the Lord as his Savior and became a Christian at the age of fourteen. In 1946 he graduated from Albert G. Parrish High School. He then attended Auburn University before joining the U. S. Air Force during the Korean Conflict, December 1950 until April 1952. He received an honorable discharge due to a family hardship. He was a faithful member of Sister Springs Baptist Church in Tyler, serving as a deacon and holding other positions in the church. He became Deacon Emeritus in 1998 at the age of seventy. He enjoyed working on his family's farm, raising cows, corn and hay. He served one year as President of the Dallas County Cattleman's Association. He also served as Vice President of the Polled Hereford Association and a number of years as Director of the Polled Hereford Association. He was employed by the ASCS (Agricultural Stabilization and Conservation Service) of Lowndes and Dallas County, retiring after many years of service. He enjoyed a life of farming, taking care of his faith companions, "Lucy" and "Pup", helping people and watching AUBURN football. Graveside services will be held at the New Live Oak Cemetery on Saturday, October 11, 2014 at 2:00 p.m. with Reverend Ed Byrom and Reverend Jonathan Jenkins officiating and Selma Funeral Home directing. Pallbearers will be Paul Pierce, Brian Strickland, Joshua Strickland, Jeff Rowell, Scott Rowell and Logan Mason. The family would like to thank Dr. Ray Brignac and his staff and well as the staff of Homestead Hospice (formerly Cahaba Hospice) for their compassionate care. Special thanks to Brenda, Tracy, Mary and Amy. In lieu of flowers, memorial contributions may be made to Homestead Hospice, Alabama Baptist Children's Home or the Selma Animal Hospital. Billy never met a stranger and will be greatly missed by all who knew him.

Billy Morgan, as he was known by family and friends was born October 25, 1928 and passed away October 9, 2014 at the age of 85. He was preceded in death by his parents, William Wallace Morgan, Sr. and Bernice Clements Morgan; infant sister,... View Obituary & Service Information

The family of William "Billy" Wallace Morgan, Jr. created this Life Tributes page to make it easy to share your memories.

Billy Morgan, as he was known by family and friends was born...