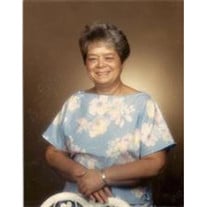 Ruby Beverly Fletcher, age 78, passed away November 12, 2011. She lived a loving, happy and useful life helping everyone she knew. She loved and lived for God and confessed Jesus Christ was not only her Savior, but her friend, comforter, confidant... View Obituary & Service Information

The family of Ruby Jeanette Fletcher created this Life Tributes page to make it easy to share your memories.

Send flowers to the Fletcher family.