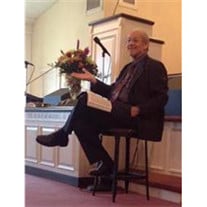 Charles Raymond Crim, age 80, of Selma, AL, passed away December 5, 2013. He was preceded in death by his parents, Cecil and Agnes Crim and brother, Bill Crim. Rev. Crim served as a minister in Baptist churches in Texas, Wyoming, Hawaii and... View Obituary & Service Information

The family of Rev. Charles Raymond Crim created this Life Tributes page to make it easy to share your memories.

Send flowers to the Crim family.