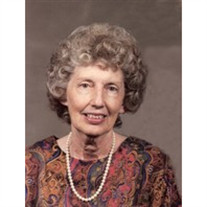 Click here to view the Memorial Video TributeVIEW VIDEOIva Waurine Wallace, age 80, a resident of Wetumpka, AL and formerly of Selma, AL, passed away July 24, 2008. She was preceded in death by her husband, Billy C. Wallace. Surviving are... View Obituary & Service Information

The family of Waurine Wallace created this Life Tributes page to make it easy to share your memories.

Send flowers to the Wallace family.