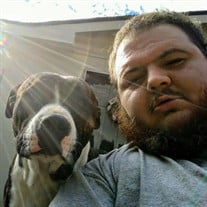 Ryan Kenneth Lee “Pookie” Cohee age 30 of Wichita, Kansas and formerly of Jones, passed away on Friday, May 13, 2022. He was born in Wichita, KS on October 26, 1991. He was a forklift operator with ThyssenKrupp Construction. Ryan accepted Jesus Christ as his Savior at an early age. He attended Joy Baptist Temple. He loved the Lord; He loved his animals and he loved taking apart almost anything but not putting it back together again. He was always willing to give a hand to help others especially his friends. He was in Cub Scouts. He attended Job Corp in Kentucky and obtained his GED in 2010. Ryan was so loved and will be missed so much by family and friends. He is survived by his parents, Michael and Lori Beard; father, Curtis Ackerson; Sister, Kristy (Chad) Womack; brothers, Michael (Jeannie) Beard, Jr. and Jeremy Beard; nieces, Leta Womack, Madison Womack, and Tiphani Beard; nephew, Ethan Beard: and a of host of aunts, uncles and cousins. He was preceded in death by his grandparents, Ralph and Irma Cline, Duncan and Nancy Beard, and Bob and Helen Ackerson. Funeral services will be held on Friday, May 20, 2022, from the Chapel of Selma Funeral Home at 2:00 p.m. with Rev. Ed Eaton officiating. The family will receive friends from 1-2 p.m. on Friday at the funeral home. Interment will follow in Pineview Memory Gardens. Pallbearers will be Michael F. Beard, Jr., Christopher Beard, Sid Womack, Chad Womack, Robert McCloud, and Jonathan Beard. Honorary pallbearers will be Jeremy Beard, Durrell Lassiter, Chris Bivins, and Aaron Osburn. Final care and arrangements have been faithfully entrusted to the care of Selma Funeral Home.

The family of Ryan Kenneth Lee Cohee created this Life Tributes page to make it easy to share your memories.

Send flowers to the Cohee family.