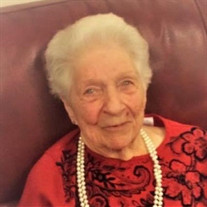 Clara Ruth (Brantley) Ward, age 97, of Geneva, AL, (formerly of Selma, AL) died December 18, 2021, at Greenwood Place Assisted Living Center attended by family and friends. She was born March 13, 1924, in McCalla, AL to the late Samuel and Bessie Brantley. The fourth of six children, she married Richard Leon Ward, Sr. on July 2, 1942. She was preceded in death by her husband, three brothers - Jack Brantley, Hoyt Brantley, and Oscar Brantley; two sisters – Nell Brantley Atkinson and Inez Brantley; and her granddaughter, Meredith Ashley Ward. Surviving are her son, Richard (Robin) Ward of Helena, AL; daughter, Brenda (Stephen) Swann of Geneva, AL; son, P. J. (Margaret) Ward of Hoover, AL; grandchildren, Elyse (Jay) Foster of Madison, AL, Sarah-Anne (John) Blackburn of Auburn, Phillip Ward of Birmingham and Laura Ward of Hoover; great-grandchildren, Madison, Ethan and John Henry Foster of Madison, and Thomas Blackburn of Auburn. Mrs. Ward worked for South Central Bell for over 40 years. She was a member of Fairview Baptist Church of Selma and under the watch care of First Baptist Church of Geneva. She enjoyed over forty years of retirement, traveling with her husband and close friends, Norman and Ellen Williams, as well as serving with hospital auxiliaries in both Selma and Geneva. Additionally, she relished time spent with and sewing outfits for her grandchildren. The family wishes to express their gratitude to the management and staff of Greenwood Place for their loving care during her residence. Funeral services will be Sunday, December 26, 2021, at 2:00 p.m. at Selma Funeral Home. Interment will be in Pineview Memory Gardens with Selma Funeral Home directing. The family will receive friends at the funeral home prior to the service from 1-2:00 p.m. Final care and arrangements have been faithfully entrusted to Selma Funeral Home

The family of Ruth Ward created this Life Tributes page to make it easy to share your memories.

Send flowers to the Ward family.