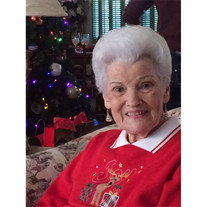 Nancy Vann Barronton, 89, of Valley Grande, passed away on December 23rd, after a brief illness.  Mrs. Barronton was born in Brunswick, Georgia on March 18, 1930, to the late Irvin Byrd Vann and Mabel Myrom Hobby Vann. Raised in Edison, she moved to Albany, Georgia in 1946 to attend the Perry Business School, where she met her future husband Thomas Edward Barronton.  They married on January 7, 1949, and were married for seventy years before his passing in October.  Mrs. Barronton moved to Selma in 1965.  She worked as the office manager and transcriptionist for Selma Pathology Lab, and its later ownersVaughn and Cytopath, for forty-two years.  She and her husband were members of the Church Street United Methodist Church in Selma for over fifty-four years, where she was a devoted attendee of the Pairs and Spares Sunday School Class. It was at the church that Nan met some of her closest friends, through the Mix and Munch group and her beloved dinner club. She was a member of the Selma Tennis League and the Rabbit RabbitBreakfast Club, which she co-founded.  She was fiercely devoted to her family, her friends, her work, and Auburn football. Mrs. Barronton was predeceased by her husband, Thomas E. Barronton, her parents, Irvin and Mable Vann, her five brothers- Irvin, Alvin, Carl, Sherman, Harold- and her sisters Frances and Helen. She's survived by her son Tom Barronton and daughter-in-law Mary, of Montevallo, her daughter Jill Barronton and son-in-law Jan Netherland of Panama City, Florida, grandson Joshua Barronton of Montevallo, and several nieces and nephews. Funeral services will be held on Saturday, December 28, 2019 at 11:00 a.m. from the Selma Funeral Home Chapel. The family will receive friends on Saturday at the funeral home one hour prior to the service. Burial will follow in Pineview Memory Gardens. In lieu of flowers, please make contributions to the Church Street United Methodist Church or the charity of your choice. Final care and arrangements entrusted to Selma Funeral Home.

Nancy Vann Barronton, 89, of Valley Grande, passed away on December 23rd, after a brief illness.  Mrs. Barronton was born in Brunswick, Georgia on March 18, 1930, to the late Irvin Byrd Vann and Mabel Myrom Hobby Vann. Raised in Edison, she... View Obituary & Service Information

The family of Nancy Vann Barronton created this Life Tributes page to make it easy to share your memories.

Nancy Vann Barronton, 89, of Valley Grande, passed away on December...