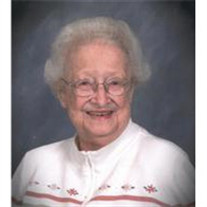 Minnie Agnes Priester Dorman died Sunday, May 5, 2013, surrounded with the love and support of her children and family. Service: The funeral honoring the Rev. Minnie Agnes Priester Dorman will be at 10:30 a.m. Thursday at Richland Hills Christian Church, 3908 Ruth Road, Richland Hills, 817-284-8679. Interment: Old Live Oak Cemetery,Selma,Al.,Saturday May 11,2013 at 10.30 a.m. Visitation: 6 to 8 p.m. Wednesday at Memorial Park Funeral Services, 8525 Mid-Cities Blvd., North Richland Hills, 817-428-9500. Memorials: The family requests that memorial gifts to honor the life of the Rev. Minnie Agnes Priester Dorman be made to a charity of choice or to the Minnie Agnes Priester Dorman Music Scholarship at Montevallo University, University Advancement and Alumni Affairs, Reynolds Hall, Station 6220, Montevallo, Ala. 35115. The Rev. Dorman was born July 9, 1919, in Selma, Ala., to Guy and Margaret Agnes Priester. She attended Baker Elementary School and Selma Junior High prior to completing her high school diploma at Selma High. While in high school, she met the love of her life, James Edward Dorman. As a young adolescent, Minnie was very involved in First Christian Church and its youth activities. Minnie entered Alabama College for Women, which later became Montevallo University. She earned a double major in music and English in 1941 and returned to Selma to teach English for one year before she and Edward married Dec. 25, 1942. Together, they began a life together serving people of faith as Edward attended the Christian Theological Seminary in Indianapolis, Ind., to earn his bachelor of divinity degree and be ordained into the ministry. Minnie entered Butler University to obtain her master's degree in church history. Minnie and her husband served Christian Churches (Disciples of Christ) as a clergy couple for 35 years in Alabama, Florida, Texas, Oklahoma and Iowa. She became active in Church Women United, a Christian ecumenical association of women, in which she remained active until just a few years prior to her death. She served as president in Oklahoma, 1965-1972, and Iowa, 1975-1978. During her years of service in Church Women United, she was twice voted Valiant Woman. She was a member of the International Christian Women's Fellowship (Quadrennial Assembly) as a member of the planning committee and choir. During Ed and her pastorates, she played the organ, directed choral and bell choirs, taught Sunday school and worked with the youth. They both were actively involved in many ecumenical church and youth activities in each of their pastorates. She and Ed were also active in their own children's school activities. After her husband's death in August 1978, she moved to Oskaloosa, Iowa, where she served as associate minister of First Christian Church. With the encouragement of the Rev. Ray Ticknor, she became ordained as a minister in the Christian Church (Disciples of Christ). Her son, the Rev. Dr. William E. Dorman, preached her ordination ceremony. She continued to serve First Christian Church in Oskaloosa until 1983, when she made the decision to move to Longview to become the director of the Christian Retirement Center. In Longview, she became an active member of First Christian Church and served as an elder and Sunday school teacher. Her span of interests included her ecumenical Church Women United work and the community where she was worked as a tutor in a literacy program and president of AARP. In August 2004 she moved to North Richland Hills where she was an active member of Richland Hills Christian Church as a Sunday school teacher and elder. The family expresses its deepest appreciation to the staff at Emerald Hills Rehab and Healthcare Center and Heart to Heart Hospice for their care of our mother. Survivors: Her son, the Rev. Dr. William E. Dorman and his wife, Fran, their children, daughter, Kelly Drescher, M.D., her husband, Andrew, and their children, Will and Ella, and daughter, Amy Dorman, her husband, Aaron Redd, and their children, Nathan, Sophia and Kayla; her son, Robert Guy Dorman and his wife, Carol, and their children, daughter Shelli King, her husband, Chad, and their daughters, Katie and Maddie, and daughter, Elisa Eiserloh, her husband, Matthew, and their daughters, Kinsley, Kylie and Sydney; and her daughter, Margie Dorman-O'Donnell.

The family of Minnie Dorman created this Life Tributes page to make it easy to share your memories.

Send flowers to the Dorman family.