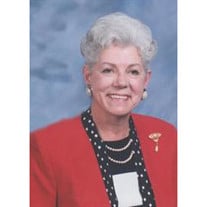 Maude Ellen Brown, age 86, of Valley Grande, AL, entered the Lord's presence October 20, 2013. She was preceded in death by her parents, Eugene C. and Sara Ann Jordan; son, Winfred Brown, Jr., grandson, Kyle Jordan Atchison; brothers, Eugene W. Jordan and Timothy Jordan and sisters, Martha Gilliland Stewart, Sara Coe, Carolyn McCracken, Jo Ann Johnston and Janet Tate. She is survived by her husband, J. Winfred Brown, Sr.; son, Durwood Jordan (Karen) Brown; daughter, Carolyn Atchison (Ralph Lee); grandchildren, Kendall (David) Hibiske, Brittany (Jimmy) Griffin, Suzanne Atchison (Drew) Lufkin and Lisa Atchison, and great-grandchildren, Jax Griffin, Aurora Griffin, Ella Hibiske, Avery Hibiske, Noelle Atchison and Ryan Atchison. Maude Ellen graduated with a B.S. from Howard College (now Samford University) in Birmingham, AL in 1949. Soon after graduation she married James Winfred Brown, Sr. in Los Angeles, CA on the ABC radio program, "Bride and Groom." After they married, Mrs. Brown joined her husband in Talledega, AL, as he was a pharmacist at Henderson Drug Co. Moving to Selma, AL in 1952 to launch Brown Drug Co., the couple involved themselves in all aspects of the community and were charter members of Elkdale Baptist Church. Having a passion for missions, she was active in WMU, serving as president several times. She also taught young girls in GAs, led Children's Choir, sang in the Sanctuary Choir with her lovely alto voice and was involved in the Pastor Search process. As an involved member of the community, she was a member of the Elkdale Garden Club. Being an accomplished clarinetist, she served as President of the Selma Music Study Club and was involved in the Selma Community Concert Association. Known as "Boppa," she was a devoted mother and a playful grandmother. She would often join the children in the neighborhood in a game of kickball, badminton and teaching them how to swim. Mrs. Brown was the epitome of a Christian lady and touched the lives of all with whom she came in contact. Funeral services will be Wednesday, October 23, 2013 at 11:00 a.m. at Elkdale Baptist Church with Rev. Cory Horton officiating. Visitation will be prior to the service at 10:00 a.m. Interment will be in Pineview Memory Gardens with Selma Funeral Home directing. Pallbearers will be Quintus Williamson, Ferrell Ford, Don Rose, Bob McMasters, Freddie Yates and Calvin Strickland. In lieu of flowers, the family requests memorial contributions be made to Elkdale Baptist Church, 2221 Elkdale Street, Selma, AL, 36701.

The family of Maude Ellen Brown created this Life Tributes page to make it easy to share your memories.

Send flowers to the Brown family.