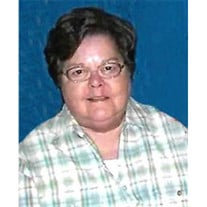 Mary Jo Barnes Chance, born April 1, 1942, as the eleventh of twelve children. She died May 2, 2017. She is survived by her husband, John W. Chance, Sr.; children, Connie (John) Rogers, Millbrook. John W. (Jeannie) Chance, Jr., Clanton, and Randy Chance of Valley Grande; sisters, Jean (Clyde) Edward, Lucille Crocker, Pauline Lane, Maxine Stockman and Christine Hale, and by a number of nieces and nephews. She is preceded in death by her parents, Marshall D and Ora S. Barnes; half-brother, Luther; brothers, Floyd, James, Braxton, Jackson and Tommy, as well as, two very special friends, Kathleen Wade Fancher and Vivian Larson She was a funny lady, who worked hard and was devoted to her family and friends. She worked for more than two and a half decades for Selma-Dallas Community Action Agency, Project Head Start as a teacher's aide, classroom teacher and later as a center director. To some she was known as "mama" or "Mary Jo." To others as "Joby" and through the years, to more and more of her children's friends, as "Mama Jo." She was an avid reader, spending hour and hours at the Selma-Dallas County Public Library and after she moved to Northport, her Sunday afternoons at the Tuscaloosa Public Library. She loved going to yard sales, working with her plants and flowers and watching hummingbirds as they came each summer. In her later years, as her health began to fail, she found pleasure sitting in the sun on the back deck, watching birds and loving on her favorite fur-baby, Cricket. Graveside services will be Friday, May 5, 2017 at 2:00 p.m. in Pineview Memory Gardens with Rev. Donald Harris officiating and Selma Funeral Home directing. Visitation will be prior to the service from 12-2:00 p.m. in the funeral home. Pallbearers will be Ronald Barnes, Robert "Berry" Vines, Joe Adkison, John John Fancher, Quintus Williamson and Earle Green. Honorary pallbearers are life-long friend, Allen Fancher and special great-nephew, David Vines, who loved to come visit Aunt Jo.

The family of Mary Jo Barnes Chance created this Life Tributes page to make it easy to share your memories.

Send flowers to the Chance family.