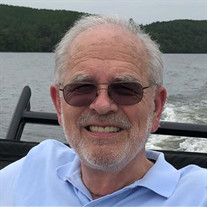 John Alexander Perdue, Jr. age 75 of Wilsonville and formerly of Selma, passed away on Sunday, September 5, 2021 at Shelby Baptist Medical Center in Alabaster. John was born in Montgomery, Alabama at St. Margaret’s Hospital on August 17, 1946, to the late John Alexander Perdue, Sr. and Rosalyn Sasser Perdue. John spent his entire adult life dedicated to public service as an Alabama State Trooper for 33 years. At his retirement, John’s final posting was to serve as the Commander for the Alabama State Trooper’s Academy in Selma. Not only did John love public service, but he loved his family and friends. One of his greatest passions in life was ensuring that laughter was present at every occasion in life. He was the jokester of the party no matter if it was sitting around the house or cruising the lake with family and friends. He also enjoyed Auburn football. John’s family and friends consider his gift to the world to be that of laughter. He is survived by his loving wife, Diana Watson Perdue; daughters, Rosemary Perdue, Suzanne Perdue, and Rachael Langley Horton (Josh); grandchildren, Alexandria Thornton (Kirby) , Evan Jackson Williams, William Burgess, Jackson Horton, Parker Horton, and Kenadie Horton; great-grandson, Alexander Thornton; mother, Rosalyn Perdue; siblings, Angelyn Perdue Streyer and Allyn Perdue (Pat); and numerous nieces, nephews, and other relatives. He is preceded in death by his father, John Alexander Perdue, Sr. A Celebration of Life service will be held on Monday, September 13, 2021 at 11:00am from the Chapel of Selma Funeral Home. The family will receive friends 30 minutes prior to the service. In lieu of flowers, the family has requested that contributions be made to a charity that advocates for animals. Final care and arrangements have been faithfully entrusted to the care of Selma Funeral Home.

The family of John Alexander Perdue, Jr. created this Life Tributes page to make it easy to share your memories.

Send flowers to the Perdue, family.