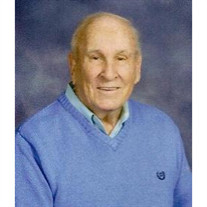 James Stanley "Whet" Wilkinson, Sr. went peacefully to be with his Lord and Savior on January 27, 2016. He had recently moved to Selma after a series of various health issues. While his health problems certainly took its toll on him, it did not prevent his continued inspiration and support to all his family and friends. Whet battled to regain his independence and always had a positive outlook that one day his health would improve. The fighting spirit in the face of such great obstacles will always be remembered by his family and friends. Whet was born on August 11, 1929 in Selma, Alabama. He was the son of Walter William and Katie Few Wilkinson. He was preceded in death by his wife, Ruby Joyce Hewston; son, Emmett Hewston Wilkinson; father, Walter William; mother, Katie Few and brother, Coleman Wilkinson. He married Ruby Joyce Hewston on July 5, 1952. At the time of her death in 2012, they had been married sixty years. She was the love of his life and life without Joyce was never quite the same for Whet. Whet is survived by his children, Stan Wilkinson (Shelly) of Sardis and Melissa Vancil (Keith) of Senatobia, MS; seven grandchildren, Tres Wilkinson, III (Keli) of Sardis, Keith Vancil, Jr. (Kristen) of Senatobia, MS, Hannah Johnson (Matt) of Thomaston, GA, Forrest Vancil of Senatobia, MS, 2nd Lt. Fletcher Wilkinson (Emily) of Millbrook, AL, Hewston Vancil (Nikki) of Starkville, MS and Ethan Wilkinson of Tuscaloosa, AL; eleven great-grandchildren, Lauryn Wilkinson, Grace Wilkinson, Rori Wilkinson, Anna James Wilkinson, Jase Wilkinson, IV, Cruise Johnson, Emmett Johnson, Walker Johnson, Ellis Johnson, Kaylin Dickerson and Kinley Vancil; sister, Jeanine Branumm (Ray); brother, Ralph Wilkinson (Rosalie) and numerous nieces and nephews. Whet lived in Dallas County his entire life. He graduated from Albert G. Parrish High School in 1947. He Attended Auburn University for one year and in the spring of 1948 he returned to Selma and worked at Central Alabama Hardware. He was called to active duty in December of 1950. He trained at Fort Jackson in South Carolina and was sent to Korea as part of a replacement tank crew. He was a tank commander in the 70th Tank Battalion, which was attached to the 1st Calvary Division. After his tour in Korea he served for a short time in Japan. He returned to Fort Jackson for discharge in May of 1952 as a Master Sergeant. Whet spent many happy days during his teenage years at the YMCA. At the age of fifteen his team won the state championship in basketball, which was coached by Paul Grist. After Whet married in July 1952 he worked at Liberty National and then began his farming career that he continued for the rest of his life. Whet was a charter member of the Craig Field Airport Authority and served thirty years on the board. He served as a county commissioner and was a part of the original committee that helped found the Farmer's Market in Selma in the 1980's. He was very proud to be a lifetime member of the Gideons and VFW. He was a member of Shiloh Baptist Church. He loved his church family and served in many different areas of the church. He enjoyed visiting the homebound in the community on Tuesday of each week, along with his pastor, Bill Gardner. Whet was famous for his sausage pinwheels that he had been making and sharing with his friends and family for fifty years. He was a huge Auburn fan and greatly enjoyed watching football and basketball games throughout the year. In his younger days he was an avid turkey hunter and enjoyed many early mornings in the woods. Whet was a lifelong American Patriot, loving husband, father, and dearly loved grandfather. His tireless dedication and selfless devotion to his family will be greatly missed by all those who loved him so very much. A celebration of his life will be held at Shiloh Baptist Church on Saturday, January 30, 2016 with Dr. William Gardner officiating. Visitation will be at 10:00 a.m. followed by the funeral at 11:00 a.m. Interment will be in Shiloh Baptist Church Cemetery. Pallbearers will be his grandsons and honorary pallbearers will be the Korean War Veterans and the Shiloh Men's Sunday School Class. In lieu of flowers, the family requests memorial donations be made to one of Whet's favorite charities: The Nana Fund at Shiloh Baptist Church, The Salvation Army or the Gideons.

James Stanley "Whet" Wilkinson, Sr. went peacefully to be with his Lord and Savior on January 27, 2016. He had recently moved to Selma after a series of various health issues. While his health problems certainly took its toll on him, it did... View Obituary & Service Information

The family of James S. "Whet" Wilkinson created this Life Tributes page to make it easy to share your memories.

James Stanley &quot;Whet&quot; Wilkinson, Sr. went peacefully to be with...

Send flowers to the Wilkinson family.