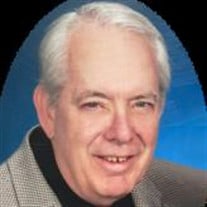 Hooper Wilkins Morrow, beloved husband, father, grandfather and great-grandfather passed away peacefully at home on July 29, 2021, and was surrounded by family in the last days of his life. Hooper was born in Birmingham, AL on May 22, 1941 to Charles Hooper Morrow and Julia May Morrow. Hooper was loved deeply by his family and friends, was a man of integrity, was a faithful member of Bremen Church of Christ, and was committed to prayer and Bible Study. He loved meals with his family, which always included a fresh jalapeno pepper on the side and hot sauce. He was a collector of tales, pocket knives, and gemstones. He served our country in the United States Air Force and was a particularly skilled marksman, even into his early battle with Parkinson’s Disease. He was avid reader, loved history and westerns, and has perhaps seen every episode of Gunsmoke, Perry Mason, Matlock and Bat Masterson. He was very proud of his Scottish heritage and on his 79th birthday, he became Lord Hooper Wilkins Morrow, upon the ownership gift of a plot of land in Scotland. He was a teller of stories and lived many great tales which will be passed on for decades to come. Hooper attended Chattanooga Bible School and Red Bank High School. He is a graduate of Troy University and Clemson University (Master of Science in Outdoor Recreation and Resource Management). His passions were spending time with family and exploring, hunting, fishing and enjoying the outdoors. Hooper was able to combine his passions with his professional career, serving posts with U.S. National Park Service and U.S. Fish and Wildlife (Blue Ridge Parkway in North Carolina, Natchez Trace Parkway in Mississippi, Hopewell Village National Historic Site in Pennsylvania, Aransas National Wildlife Refuge in Texas, Loxahatchee Wildlife Refuge in South Florida, and the Grand Canyon National Park). In addition to his work with federal government agencies, Hooper also spent time at various state parks (Tishomingo State Park in Mississippi and John Tanner State Park in Georgia) as well as in the central office as the State Interpretive Officer for Mississippi Department of Natural Resources. As an interpreter, Hooper ensured park authenticity and created meaningful experiences for park visitors and guests through significant artifacts and exhibits. In 1986, he retired from US Fish and Wildlife to pursue a lifelong dream of owning a business with his wife Mary Sue. The couple owned and operated Brightleaf Plants (Brightleaf Square in Durham, North Carolina). Hooper and Mary Sue sold their business in 1989 and he returned to the state park system in Georgia (1990 -2006) in order to spend more time with his family. In Hooper’s last post he served as Assistant Superintendent at John Tanner State Park in West Georgia. He is survived by his wife of 54 years, Mary Sue; four children: Marc, Charles, Tanya, and Amanda; their spouses: Laura Morrow, Elizabeth Morrow, and Michael Echols: Grandchildren: Taylor Watson (Cody), Grayson Morrow, Cortland Morrow, Trip Morrow, Will Morrow, Mollie Echols, Maranda Echols, and Mackenzie Echols; Great-grandchild: Mary Jane Watson; Sister: Julia May Paepcke; Sisters-in-law: Corina Johnson, Sardenia Peacock, Rita Kay Morrow, Brothers-in-law: Bud Paepcke, and Harry Adkins; Nieces: Ronda Ware (James) and Leann Crawford (Baron); Nephews: Shane Peacock (Susan), Dorsey Morrow (Paige), and Michael John Morrow (Sarah). He was preceded in death by his parents, Hooper & Julia May Morrow; brothers, Charles David and Dorsey; brother-in-law, Randall Peacock. Visitation and a Celebration of Life will be held on Sunday, August 1st at 1:00pm and 2:00pm at Bremen Church of Christ with Johnny McDaniel officiating. Interment will be conducted Monday, August 2nd at Pineview Memory Gardens in Valley Grande, Alabama. Those serving as pallbearers will be Grayson Morrow, Cortland Morrow, Trip Morrow, Will Morrow, Shane Peacock, and James Ware.

Hooper Wilkins Morrow, beloved husband, father, grandfather and great-grandfather passed away peacefully at home on July 29, 2021, and was surrounded by family in the last days of his life. Hooper was born in Birmingham, AL on May 22, 1941... View Obituary & Service Information

The family of Hooper Wilkins Morrow created this Life Tributes page to make it easy to share your memories.

Send flowers to the Morrow family.