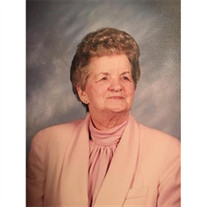 Frances Moore, age 94, of Plantersville, AL, departed her earthly home to be with the Lord on December 6, 2017. She was preceded in death by her husband, Chief Petty Officer James Moore; parents, Wade and Leila Friday; brothers, John, Ross,... View Obituary & Service Information

The family of Frances Moore created this Life Tributes page to make it easy to share your memories.