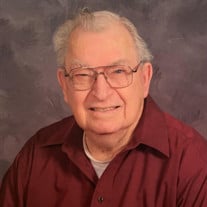 Duncan Ferrell Beard passed away peacefully into the arms of his Lord and Savior on January 25, 2022, at age 89. Known as “Pop”, he was a wonderful husband, father, grandfather, and great grandfather who held enduring affection for his family and friends. He felt blessed for the gifts given to him by God and loved to sing gospel music. Ferrell’s life was as big as his personality, and he lived it well. He was loved by his family and devoted to God. Ferrell was born on June 19, 1932 in GA, to Doc and Ora Beard. He enlisted in the Air Force following high school and retired in 1971. Ferrell was very proud to have served his country and in characteristic modest manner shared by so many of those men and women, says he just did what he was asked to do. Other than this, he never spoke about unpleasant wartime events and only professed his profound admiration for his military brothers. We are all grateful for his service and sacrifice and many are better people because of him. He met his sweetheart and love of his life, Nancy Darlene Beard, while stationed in VA. They were married in 1955 and spent 61 glorious years together before Darlene preceded Ferrell in death on May 9, 2016. Ferrell was preceded in death by his parents, Doc and Ora Beard and siblings. He was also preceded by his son, Samuel Benson Beard; and daughter, Patricia Ann Beard Wallin. Surviving are son, Michael Ferrell (Lori); daughter Mary Beth (Robert) McCloud; and son Richard Alan (Jennifer). Ferrell was blessed to be crowned with numerous grandchildren and great-grandchildren and relatives numbering like the stars of Heaven. He will be missed but is now at peace, embraced by God and reunited in the arms of his Heavenly family. His earthly family will greet friends from 1:00 to 2:00 pm on Friday, January 28, 2022, at Selma Funeral Home in Valley Grande. Graveside services will be held at 2:00 pm where Ferrell will be buried at Pineview Memory Gardens next to his beloved wife, Darlene, with Brother Edward Eaton officiating. Pall Bearers will be Mike Beard, Rick Beard, Christopher Beard, Christian Beard, Robert McCloud and Aaron Osburn. Final care and arrangements have been faithfully entrusted to the care of Selma Funeral Home.

Duncan Ferrell Beard passed away peacefully into the arms of his Lord and Savior on January 25, 2022, at age 89. Known as &#8220;Pop&#8221;, he was a wonderful husband, father, grandfather, and great grandfather who held enduring affection for... View Obituary & Service Information

The family of Duncan F. Beard created this Life Tributes page to make it easy to share your memories.

Duncan Ferrell Beard passed away peacefully into the arms of...

Send flowers to the Beard family.