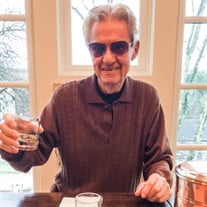 Charles Edward Moore passed away after a brief illness on February 22, 2021. Charles was born in Tuscaloosa, Alabama, January 11, 1932. He is survived by his niece and goddaughter, Lee Ann Jung (Chris); sister, Louise Hopkins; sisters-in-law, Sarah Ann Moore, Patsy Moore, and Lynn Moore; his dearest friend of many decades, Danny Clark (Linda); and many nieces and nephews. He is preceded in death by his wife, Dorothy Deian Moore; his parents, Edward Lynley Moore and Sally Mae Moore: his brothers, Troy Moore (Eva), Billy Moore, Wayne Moore, Robert Moore (Linda), and Ludie Moore; and his sister, Virginia Lawson (Lester). Charles faithfully served his country as an enlisted member of the United States Air Force. While stationed in Merced, California, he met his beloved wife, Dorothy Deian Fitzgerald Moore. After a chance meeting at a drive-in movie, he joined her family for lunch, and the rest is history. The two married and eventually moved to Alabama. Charles delighted in Deian’s company, and the two were completely devoted to one another, as soulmates are. They genuinely enjoyed life and one another as most couples only hope to do. Charles and Deian were involved in the business communities of both Selma and Montgomery, and until Deian passed away in 2015, the pair maintained a commercial real estate business in Montgomery. Charles continued to actively manage the business until he moved to Lexington, Kentucky, in 2017 to be with his niece and her family. Charles was a cheerful servant to others and delighted in the company of people always. He was quick-witted, generous, an exceedingly hard worker, and lively up until his last days. His greatest joys were in spending time with his family and friends. Although Charles and Deian did not have children of their own, they gave of themselves completely to their niece, Lee Ann, her husband, Chris, and their children, Spencer and Maisie, as if they were their own. They were reliably present at every holiday meal, recital, game, and graduation as any parents would be, with giant smiles, laughter, and an ever-present camera. Charles’ mark is indelible on those who knew and loved him, and he will be dearly missed. Due to the current pandemic, the family of Mr. Moore has elected to not hold any services. You may leave online condolences, sign the guest registry, or share a memory on the Selma Funeral Home website. Final care and arrangements have been faithfully entrusted to the care of Selma Funeral Home.

The family of Charles Edward Moore created this Life Tributes page to make it easy to share your memories.

Charles Edward Moore passed away after a brief illness on February...